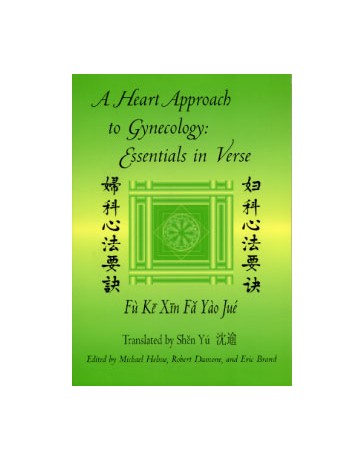 A HEART APPROACH TO GYNECOLOGY: ESSENTIALS IN VERSE. FU

The Fu Ke Xin Fa Yao Jue is the gynecology section of the imperial compilation known as the Golden Mirror of Orthodox Medicine, a comprehensive, 90-volume compendium of medical theory and practice c ...

The Fu Ke Xin Fa Yao Jue is the gynecology section of the imperial compilation known as the Golden Mirror of Orthodox Medicine, a comprehensive, 90-volume compendium of medical theory and practice compiled by court physicians in 742 and used as a textbook for the Imperial Medical School in the Qing Dynasty. The authors claimed that the Golden Mirror contained the core of Chinese medical doctrine: with­out this "bright, golden mirror," replete with vivid illustrations and effective therapies for many disorders, how could scholars see the origin and lineage of orthodox Chinese medicine clearly?

Compared to other classics on gynecology, this work was both a relatively late arrival and relatively brief. Nonetheless, it rapidly gained favor among physicians. It is dis­tinguished by its concise and well-expressed insights, which were presented in verses complemented by annotations. The text was highly regarded because it was a rigorous and scholarly work that covered a wide variety of gynecological issues in a manner that allowed the key clinical points to be rapidly assimilated. Furthermore, the formulas con­tained within were effective and were based upon generations of experience. The Chinese name for this text includes the phrase "xin fa," which means "heart approach." A "heart approach" refers to an understanding that comes after a long period of thought about problems.

In the six-volume gynecology section, the most common topics related to women's health are presented. Chapters are structured with verses followed by anno­tations and are dedicated to menstruation, fertility, pregnancy, childbirth, and postpartum care. Altogether, I 6 classical formulas and their variations are presented. Focusing on identifying yin and yang patterns of illness based on presenting signs, the Fu Ke investi­gates women's health in a clear and systematic way, epitomizing the unique and sophisti­cated philosophy and style of Chinese medicine, drawing from major medical classics and presenting information in a concise way for easy learning. It is a unique text that represents the pinnacle achievements of Chinese medicine prior to the modern era.

However, it is not just a medical classic of the past. Because it covers conditions that are timeless and common, and provides insights into the evolution of Chinese med­ical theory, it offers clinically useful tools for the modern day. It offers readers an under­standing of how to utilize many classical formulas and their variations, and how to create their own formulas based on what they have learned from this text.

23 other products in the same category: