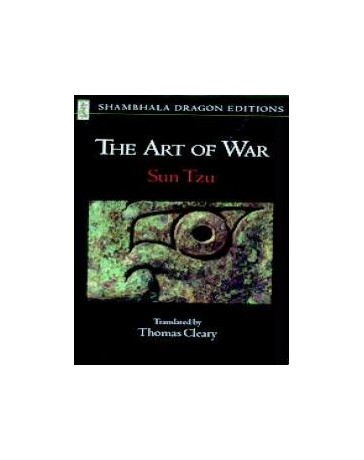 THE ART OF WAR - SUN TZU

"Thomas Cleary's translation of Sun Tzu's 2,ooo-year-old The Art of War makes immediately relevant one of the greatest Chinese classical texts. There's not a dated maxim or vague prescription i ...

"Thomas Cleary's translation of Sun Tzu's 2,ooo-year-old The Art of War makes immediately relevant one of the greatest Chinese classical texts. There's not a dated maxim or vague prescription in it. 'To win without fighting is best,' Sun Tzu said. For him, war was coeval with life. Absorb this book, and you can throw out all those contemporary books about management leadership."?Newsweek
Compiled more than two thousand years ago by a mysterious warrior-philosopher, The Art of War is still perhaps the most prestigious and influential book of strategy in the world today, as eagerly studied in Asia by modern politicians and executives as it has been by military leaders since ancient times. As a study of the anatomy of organizations in conflict, The Art of War applies to competition and conflict in general, on every level from the interpersonal to the international. Its aim is invincibility, victory without battle, and unassailable strength through understanding of the physics, politics, and psychology of conflict.
This translation presents the classic from the point of view of its background in the great spiritual tradition of Taoism, the origin of psychology, science, and technology in East Asia and the source of the insights into human nature that underlie this most revered of handbooks for success. Translated from a standard collection of commentaries on Sun Tzu's text by eleven interpreters, the work has been edited by Thomas Cleary to bring out the meaning of the principles of strategy. In addition, the translator provides an extensive introduction discussing the content and background of the book.
Thomas Cleary, who holds a Ph.D. in East Asian Languages and Civilizations from Harvard University, is the translator of numerous works in Buddhist, Taoist, and / Ching studies. A companion volume to The Art of War is his translation Mastering the Art of War by Zhuge Liang and Liu Ji, also in Shambhala Dragon Editions.

30 other products in the same category:

Oriental art of living - well being