> Bonnes affaires>Articles à 50%>Affect Regulation and the Repair of the Self
Prix réduit! 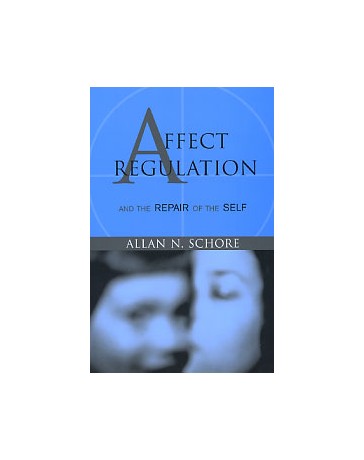 Affect Regulation and the Repair of the Self

The second volume of Allan Schore's comprehensive treatment of affect, regulation, and human development, Affect Regulation and the Repair of the Self, applies his developmental theory to critical areas of early emotional development, psychoanalysis, and psychotherapy.

The second volume of Allan Schore's comprehensive treatment of affect, regulation, and human development, Affect Regulation and the Repair of the Self, applies his developmental theory to critical areas of early emotional development, psychoanalysis, and psychotherapy. The material presented here revises our understanding of human development and, consequently, strongly suggests changes in clinical practice that take into account the new and often astonishing findings from the neurosciences.

An internationally recognized theoretical researcher, Schore has ventured into and had an impact upon a number of fields, including developmental psy-chopathology, psychiatry, neuroscience, and psychoanalysis. His areas of focus have been as wide ranging, encompassing the emotions, attachment, and trauma. Because of his interdisciplinary approach, Schore's writings have appeared in a variety of journals and theoretical scientists and clinicians in these different disciplines may not have noted the unity and coherence of Schore's regulation theory. This volume and its companion, Affect Dysregulation and Disorders of the Self, correct this possible oversight by bringing together the overarching span of Schore's past and recent integrative work on affect regulation and dysregulation. These two volumes show both the theoretical breadth of his research and the practical import of his findings for optimal experience-dependent brain growth in both early developmental and later psychothera-peutic relational contexts.
In Part I, Developmentally-Oriented Psychotherapy, Schore offers psychoneurobiological models for describing the mechanisms basic to psychotherapeutic change. Drawing upon data brought to light in the 1990s and after, these chapters show how current neuroscientific findings confirm Schore's own groundbreaking hypothesis regarding the fundamental mechanisms of human communication. Schore's animating hypothesis revises John Bowlby's monumental work on the role of unconscious attachment functions in everyday life by proposing that self-organizing nonconscious emotional transactions involve right brain-to-right brain bodily-based communications. The scientific support for this theory is likely to have a significant influence not only on how we think about the relationship between the infant and the caregiver but also the relationship between the patient and the therapist.

A full-color insert illustrates the science upon which Schore draws. Figures, charts, and color brain scans elucidate the complex neuroscientific research and give evidence of the radical technological breakthroughs that spurred on researchers during the Decade of the Brain, and beyond.
In the second part of this volume, Developmental Neuropsychoanalysis, Schore explores the early organization of the biological substrate of the human unconscious mind. The field of developmental neuropsychoanalysis is one in which Schore is a recognized pioneer. After years of research and theoretical development, Schore returns not just to his own early work, but also to the work of Freud and other earlier explorers of the inner world. The description of the critical impact of early object relations on the development of internal psychic structures is elaborated, and in important respects revised, by turning to neuro-science. By specifically identifying the internal structural systems about which Freud and others speculated, traditional psychoanalysis is both changed and yet preserved in its basic intuitions about human development and psy-chopathology.

Like the data he draws upon, Schore's findings address numerous disciplines, from neuroscience to psychology, psychiatry, psychoanalysis, pediatrics, psychosomatic medicine, education, and social work. The complex biopsychosocial model that emerges from Schore's research highlights the integrative character of the biological and the psychological realms in early development and over the course of the human lifespan. Medicine, social services, or public policy cannot be properly considered or reasonably effective in the absence of the rich perspective of human development advanced here.